Carcinosarcoma of the Pancreas with Longer Survival: A Case Report and Literature Review

Background: Carcinosarcoma is a rare type of malignant tumor that can occur at various organs, such as the digestive tract, lung, and mammary glands (1-4). Carcinosarcoma of the pancreas is an extremely rare and complicated malignant neoplasm, with the characteristics of high invasiveness and rapid progression, early metastasis, and poor prognosis (4).

Case Presentation: We reported a 75-year-old male patient who was admitted with the chief complaint of intermittent pain in the right upper abdomen for more than one month. Computed tomography scans revealed a space-occupying lesion located in the tail of the pancreas considering pancreatic carcinoma. The patient underwent surgical resection of the tumor. Macroscopic observations showed a mass of approximately 6 cm × 5 cm with grayish-white cut surface. Histological analysis showed a large amount of abnormal differentiated epithelial cells and spindle cells. The immunohistochemistry results demonstrated biphasic neoplasm with both malignant epithelial and mesenchymal components. Then, the patient was diagnosed with carcinosarcoma of the pancreas. Although pancreatic carcinosarcoma was considered to have a poor outcome as previously reported, the patient was free of recurrence for 15 months after the surgery, a longer tumor-free survival recorded for this type of cancer, maybe because the patient received gemcitabine adjuvant chemotherapy after the surgery. The current literature shows that the longest postoperative survival time is 26 months (5).

Conclusions: Carcinosarcoma of the pancreas is a rare tumor. Surgery is the main way of treatment, and chemotherapy can delay tumor development to some extent.

Carcinosarcoma of the pancreas arises from the pancreatic ducts and acinus. It has two distinct components, including a carcinomatous component and a non-epithelial component of mesenchymal origin. Sarcomatoid carcinoma of the pancreas has four types: (i) Spindle cell carcinoma, primarily consisting of malignant spindle cells; (ii) osteoclast giant cell tumor. This type of tumor has two kinds of cells: malignant spindle epithelioid cells and osteoclast giant cells; (iii) Pleomorphic giant cell carcinoma, which was characterized by highly pleomorphic mononuclear and multinuclear giant cells; and (iv) round cell anaplastic carcinoma, solely composed of monotonous rounded, small- to moderately-sized tumor cells (5); histopathology of this case consists of malignant atypical spindle cells with epithelial components. Following a review of articles published in English, we found relatively few reports of pancreatic carcinosarcoma with spindle cell carcinoma (5-11). In this article, we summarize pathological features, treatment regimen and prognosis (see Table 1 for details) of pancreatic carcinosarcoma with spindle cell, reporting a case who was diagnosed with pancreatic carcinosarcoma and free of recurrence for 15 months after the surgery; a longer tumor-free survival was recorded for this type of cancer.

A 75-year-old male was admitted to the first hospital of Jilin University, Changchun, Jilin province, China, with the chief complaint of intermittent upper abdominal pain for more than one month. The patient had no fever, chills, abdominal distension, jaundice and vomiting, and so on. Meanwhile, he had neither a family history of digestive tract diseases nor a history of addiction to cigarettes and alcohol. Physical examinations revealed mild tenderness in the upper abdomen without the detection of a mass. The laboratory results were as follows: white blood cell (WBC) count, 34.24 × 109 cells/L; red blood cell (RBC) count, 4.01 × 1012 cells/L; hemoglobin, 123 g/L; blood platelet count, 227 × 109 cells/L; carbohydrate antigen (CA)19-9, CA125, α-fetoprotein (AFP) and carcinoembryonic antigen (CEA) levels were 4.67 U/mL (normal range, < 37.00 U/mol), 19.15 U/mL (normal range, < 35.00 U/mol), 2.08 ng/mL (normal range, < 20.00 ng/mL), and 2.75 ng/mL (normal range, < 5.00 U/mol), respectively; total bilirubin (TBIL), 4.1 μmol/L; direct bilirubin (DBIL), 1.9 μmol/L; aspartate aminotransferase (AST), 22.1 U/L; and alanine aminotransferase (ALT), 14.3 U/L. Computed tomography (CT) scan (Figure 1A) revealed a space-occupying lesion located in the tail of the pancreas, which was pressing against the stomach wall, and no significant enhancement was found in the enhanced CT scan. A pancreatic carcinoma was detected. The patient subsequently underwent surgical resection, including splenectomy, distal pancreatectomy, and partial gastrectomy. No postoperative complications occurred, such as intra-abdominal bleeding, pancreatic fistula, gastric functional emptying disorder, or infection. General observations showed a mass of approximately 6 cm × 5 cm that was located in the tail of the pancreas adjacent to the tunica serosa ventriculi (Figure 1B). The tumor exhibited a grayish-white cut surface. The hematoxylin-eosin (H&E) staining showed a large amount of abnormal differentiated epithelial cells and spindle cells. The immunohistochemistry results demonstrated that the epithelial region was positive for CEA (Figure 2A). In contrast, the spindle cells were positive for Vimentin (Figure 2B). Meanwhile, in the tumor region, spindle cells were visible with acidic cytoplasm (Figure 2C). Spindle cells with obvious nuclear atypia and brisk mitotic activity are seen using hematoxylin and eosin staining (Figure 2D). Based on the results above, carcinosarcoma (spindle cell) of the pancreas was diagnosed. The patient received gemcitabine adjuvant chemotherapy, which may be the reason for surviving this patient tumor-free at the follow-up of 15 months after the surgery. 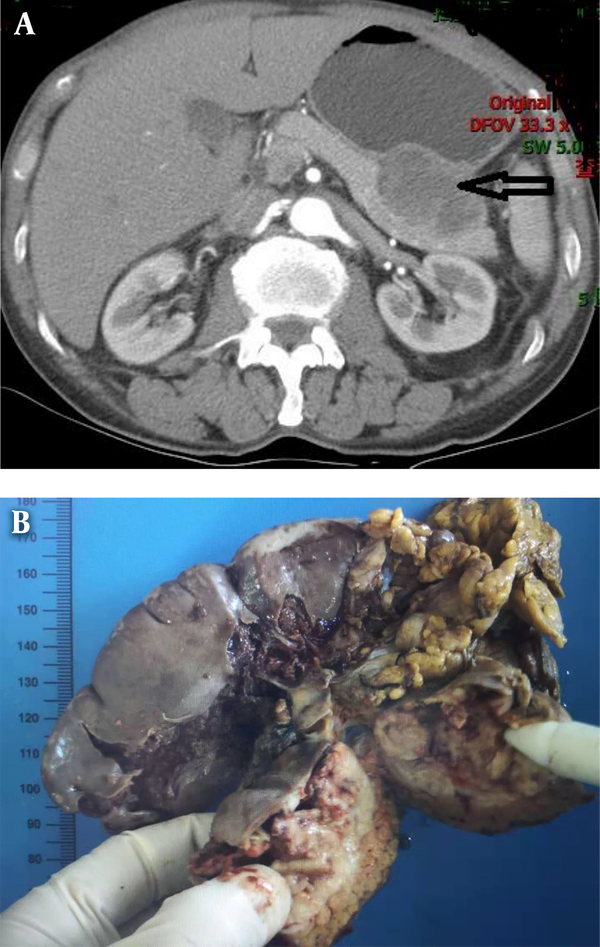 Figure 1. Computed tomography (CT) scan (A) revealed a space-occupying lesion located in the tail of the pancreas, which was pressing against the stomach wall. General observations (B) showed a mass of approximately 6 cm × 5 cm, and the tumor exhibited a grayish-white cut surface. 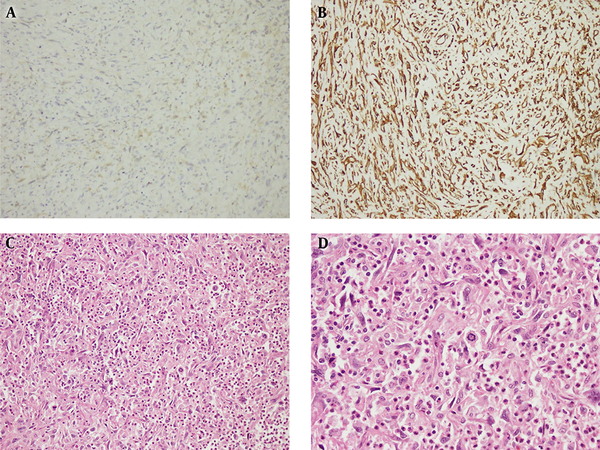 Figure 2.  The immunohistochemistry results demonstrated that the tumor region was positive for CEA (A, X200) and vinmetin (B, X200). Meanwhile, spindle cells were visible with acidic cytoplasm in the tumor region (C, HEX200). Spindle cells with obvious nuclear atypia and brisk mitotic activity are shown (D, HEX200).

Carcinosarcoma of the pancreas accounts for approximately 2% of pancreatic exocrine tumors (4), which are more frequent in the head of the pancreas (11). Carcinosarcoma usually lacks of early clinical signs and symptoms. Most patients are not accurately diagnosed until it has become metastatic. Carcinosarcoma, therefore, has a poor prognosis, with the postoperative survival time of 6 months (14). Shen et al. (15) had reported an elderly female with pancreatic carcinosarcoma who had liver metastasis, and the patient died two months later after the radical resection surgery due to a recurrence. In another case report (11), a Chinese male underwent surgical resection but died six months later because of liver metastasis and peritoneal metastasis. Ruess et al. (16) reported a 73-year-old German woman with intermittent pain, who survived four months after a pancreatoduodenectomy. Surprisingly, the patient who received intravenous chemotherapy had survived for 15 months in our case, which is the longer tumor-free survival recorded for this type of cancer.

The diagnosis of pancreatic carcinosarcoma has a lot of difficulties and may involve ultrasonography, CT, and MRI, as well as ultrasound-guided fine-needle. Preoperative imaging such as CT and MRI may help to diagnose the nature of the tumor. Carcinosarcoma on radiographs often revealed well-defined cystic density shadows with hemorrhage or necrotic foci (17). Some scholars support the use of ultrasound-guided fine-needle biopsy for clarifying the nature of the tumor; this technology has been questioned for its safety due to its uncertain role in tumor spread (18). The final diagnosis depends on pathological examination, which may reveal biphasic neoplasm with both malignant epithelial and mesenchymal components by immunohistochemical analysis (19).

Surgical resection is the first choice for clinical treatment of pancreatic carcinosarcoma, especially for early-stage lesions without metastasis. Radiotherapy and chemotherapy may have some adjuvant therapeutic significance for patients with unresectable metastatic lesions. Ren et al. (20) reported a Chinese male who underwent surgical resection of the tumor after the diagnosis of pancreatic carcinosarcoma. Seven months after surgery, the patient received intravenous chemotherapy (gemcitabine, oxaliplatin, and fluorulureside). The patient had no tumor recurrence or metastasis at three years after surgery. Zhu et al. (14) reported a 53-year-old woman who received surgery of pancreatoduodenectomy; then, she received five cycles of chemotherapy. In the end, she has remained free of recurrence for 20 months. The case we reported was also treated with gemcitabine adjuvant therapy and had a tumor-free survival for 15 months. Therefore, we believe that it is recommended to give postoperative adjuvant chemotherapy for the disease. Systemic chemotherapy is suited for patients who are after surgery and with distant metastasis or contraindication to surgery. Chemotherapy also is an important secondary option for pancreatic carcinosarcoma. However, till now, there is no standard chemotherapy protocol developed (4).

Pancreatic carcinosarcoma has two components of epithelioid composition and mesenchymal composition. Owing to the very low incidence of this tumor, an optimal treatment strategy has not been defined, and the prognosis is poor. Most scholars believe that surgery is the main way of treatment, and chemotherapy can delay tumor development to some extent. However, till now, there is no standard chemotherapy protocol developed. Therefore, in our clinical work, we need to improve the understanding and researching of pancreatic carcinosarcoma to strengthen the treatment of the tumor.